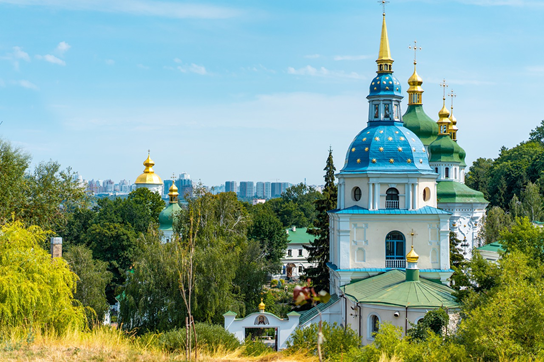 Given the recent events that have put Ukraine in the spotlight of world news, we wanted to look at the country through the lens of 7C!

Ukraine became a spotlight on the world map after the Chernobyl nuclear power plant disaster in 1986, causing an emergency evacuation of the nearby town of Pryp’yat as well as long-term, severe environmental problems throughout northwestern Ukraine as a result of radioactive fallout.

But outside of the spotlight, many do not know that Ukraine has a rich and fascinating culture, and much of it is rooted within their own language.

Though the language has existed in the country for a long time, Ukrainian became the country’s official language in 1989, which is what most of the people native to Ukraine speak.  Formerly part of the Soviet Union, Ukraine declared its independence in 1991, the language has become core to its cultural identity.  Ukrainian is a part of the Slavic language that is a neighbor to Russian but also has significant ties to the Polish language; there are also a significant population of Russian, Hungarian, Crimean Turkish, Bulgarian, Romanian/Moldovan, Rusyn, Belarusian, Yiddish, and Polish speakers.  While there is political controversy regarding whether Ukrainian or Russian should be spoken in the general public, most Ukrainians are bilingual within their everyday life, and language isn’t perceived as a declaration of one’s political loyalties.

Ukrainian utilizes a phonetic Cyrillic alphabet, with synthetic grammar that prioritizes conveying information through word modification rather than placement order, which developed from the Kyiv and Poltava dialects from the eighteenth century.

Geographically,  at over 233,031 mi² Ukraine is the second-largest country in Europe, second only to Russia; it borders the northern shores of the Black Sea and the Sea of Azov.  It is a neighbor to Slovakia, Hungary, Poland, Belarus, Russia, Moldova and Romania.  The country’s terrain is very diverse, with snow-crested alpine mountains to the west, a broad expanse of fertile, lowland plains to the south, and a pine-covered taiga to the northeast.  It has a population of about 43.46 million people.

Ukraine is one of the world’s largest producers of sunflower oil and sugar beets, while also being one of Europe’s key producers of grain and potatoes.  Their culture is very traditional and community-oriented.  Their society favors endogamy, and the people are generally very friendly and welcoming.

Translation: is a term that refers to any nonverbal change from one language to another, focusing on accurately matching both the source and target language.

Interpretation: is a verbal change from one language to another. This can take place in person, over the phone, or virtually.

previous
Translation vs Interpretation
next
South Africa: The Rainbow Nation