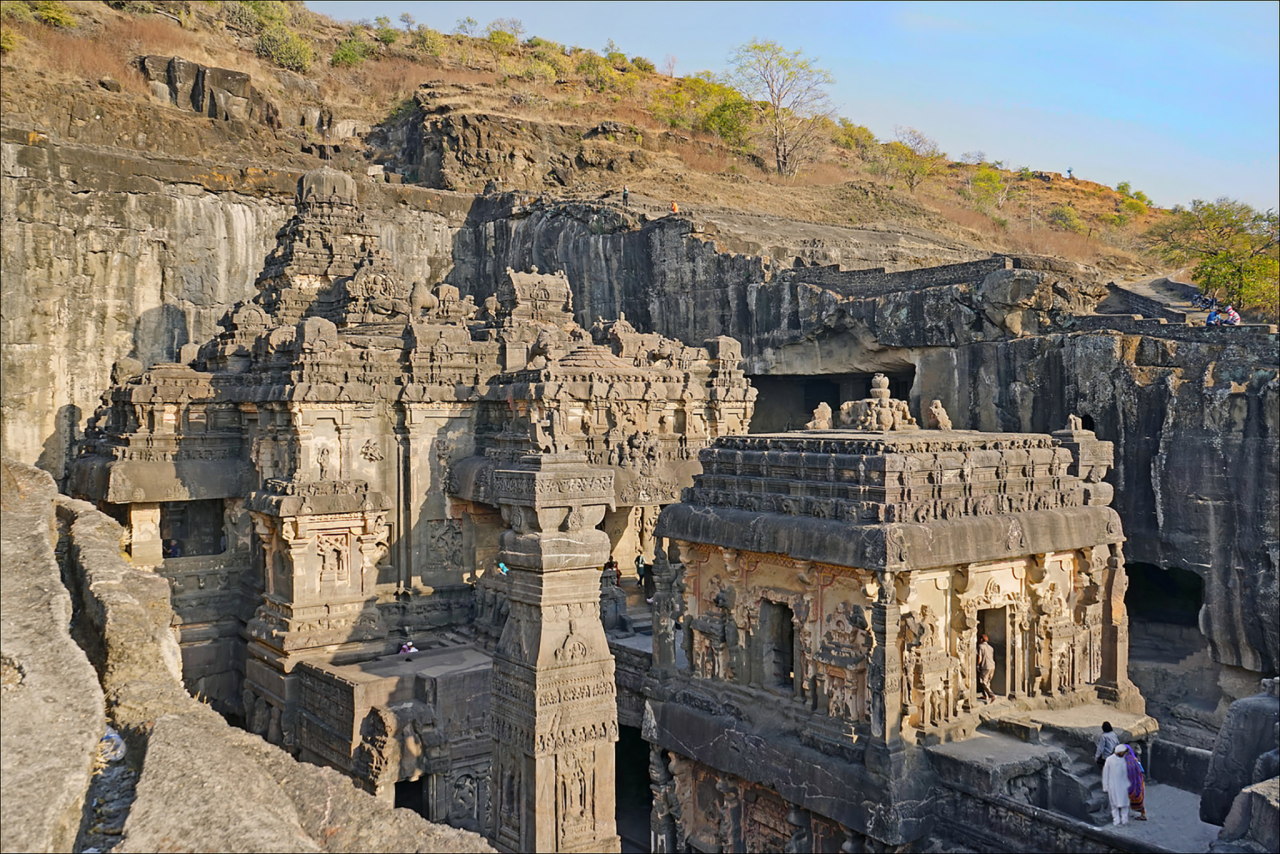 The Kailasa Temple at Ellora in western India is a feat of architectural engineering. It is considered to be the largest of all 34 rock-cut Buddhist, Hindu, and Jain temples in the Ellora Caves. Historians believe it was commissioned originally by the Rashtrakuta king Krishna, who ruled from 756-773 CE. This temple was carved entirely from the rock face which surrounds it. Rock-cut style temples were popular in India from the 5th century CE to the 15th century CE. The temple is a free-standing structure surrounded by smaller cave shrines carved out of the same black rock. Historians believe the Kailasa Temple was constructed over many decades under different reigns, due to the fact that it has no known origin inscribed on the building and the fact that it includes multiple distinct architectural styles.

This temple was carved from the top to 100 feet down in one single excavation. This style could not have been achieved by carving it from the front, which was the common style for other rock-cut structures at the time.

It was modeled after the Virupaksha Temple at Pattadakal which was inspired by the Kailasa Temple at Kanchi. Historians theorize after king Krishna defeated the people who built the Virupaksha Temple, he saw the grandness of the architecture and commissioned the Kailasa Temple at Ellora. He created it to honor the Hindu deity, Shiva. Despite attempts by enemies to destroy it, the temple has been preserved for the most part- the paintings that once ornately decorated the interior have faded over time, but most of the architectural structures have survived many centuries. This was the last spectacular rock-cut temple to be created, however, there have been discoveries of smaller rock-cut sites in surrounding areas. In viewing the intricate designs on the walls of the temple, we can see how at the time people were just as complex as we are now. It is amazing to consider the ways they built this structure before modern technology. Constructing a temple-like this was ground-breaking at the time, both literally and figuratively, and it shows how people during earlier centuries continued to innovate without modern technology. Their architectural prowess should be admired and revered as the basis for the design of many of our buildings today.

🤩 Creative and beautiful Wordpress Theme for Therapy and Counseling - Lycka is now out! https://t.co/odOb2lcx9P https://t.co/020EBRP9sL

If you have any support question regarding our WordPress themes and plugins please go to: https://t.co/OgUHBOK0Yg a… https://t.co/tmXVs0JSfZ

A new WordPress theme for car services, car detailing, auto wash & repair has been launched! Get it NOW at 40% off… https://t.co/nQFtSSGjjM